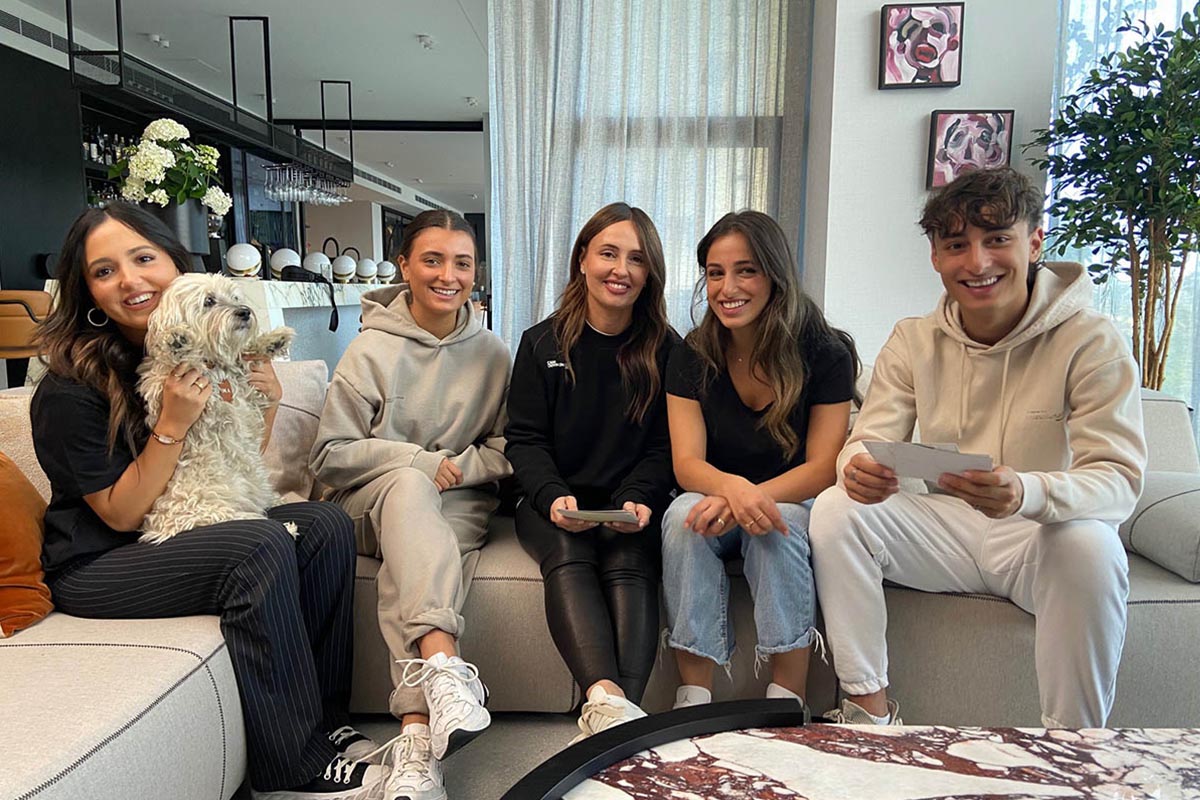 "Getting out of bed in the morning is a huge challenge. I am scared that if I don’t get up and push myself, then I will regress. That I may become bedridden and not be able to help my family or work. I feel crippled by pain, lethargic, and all my senses are saying ‘stay in bed’. Once I push through the physical torment, the mental defiance begins. I start moving, and I get up."—Julia Argyrou.

Having lived with chronic endometriosis for most of her life, Julia Argyrou knows how debilitating this disease can be. Her battle with endometriosis started on the day she got her first, extremely heavy period. Like many other girls, she asked her mother about it, who told her this is just what happens when you get your period.

Less than a year later, the pain began. Julia’s mother suggested she take some Panadol and that the pain was normal. It was only when the pain became unbearable that Julia convinced her mother that something wasn’t right and arranged to see the family GP. The doctor also told Julia that period pain was normal and prescribed the contraceptive pill.

Julia’s doctor tried different contraceptive pills to find one that didn’t cause her any side effects but none relieved her symptoms. Instead, the pill caused her to feel nauseous and led to the rare side effect of blood clotting and emergency visits to the hospital.

Over the years, Julia saw various doctors for chronic pain and was told repeatedly that her symptoms were a normal part of menstruation. The constant, debilitating pain without any diagnosis left Julia doubting her own resilience. She spent long periods suffering in silence, often missing work and social activities. She felt alone and isolated.

When she turned 21, Julia saw a gynecologist and had her first laparoscopy, which confirmed that she had endometriosis. The laparoscopy showed many lesions that had attached themselves to Julia’s ovaries, fallopian tubes, uterus, bowel and pelvis.

It had taken seven years, but Julia was relieved to finally have a diagnosis. It explained why she was suffering so much pain, and she felt vindicated. She could now explain to her employer, friends, and family that she wasn’t making it up and there was a medical reason for her pain.

Julia was hopeful that the laparoscopy would cure the endometriosis and she could lead a normal life without pain, frequent hospital visits and people thinking she was crazy. While there was some brief relief from the pain, unfortunately, it came back and got worse over time.

Whenever the pain became unbearable, she underwent another laparoscopy. In total, Julia has had 14 laparoscopies from the time she was first diagnosed. The laparoscopies have caused extensive scar tissue and adhesions, but in her case, they have done little to help with her pain. The only time Julia has been pain-free since Grade 6 was when she was pregnant and for the first few months after the hysterectomy.

Many people who suffer from endometriosis can find it difficult to conceive. Julia was lucky enough to have four healthy children. After the birth of her last child, she encountered complications that led to internal haemorrhaging, and the doctor performed a hysterectomy.

For months after the hysterectomy, Julia was pain-free. She was told—and expected—that the hysterectomy would cure her endometriosis. So, when the pain returned, she was devastated.

Julia still suffers from back and pelvic pain caused by endometriosis, and pain from ovarian cysts on her remaining ovary. She no longer seeks relief from laparoscopic surgeries and is doing her best to manage the pain using medication. Julia said she does everything she can to avoid taking it.

‘I hate taking medication. It makes me feel lethargic. I can’t think or function properly, and I don’t like how it makes me feel,’ said Julia.

Julia’s pain is constant. It simmers away most days at a level that she describes as ‘manageable’. There are days when the pain is so severe that it causes her to black out. It’s not uncommon for her family to find her passed out on the floor with bruising caused by the fall. She no longer drives, as she has no idea when the pain will spike to a level that will cause her to black out. She can’t plan events in advance as she doesn’t know the level of pain she will be experiencing on any given day.

‘We have cancelled on people so many times for so many dinners and events that people just stop asking,’ said Julia.

Julia said that endometriosis has had a significant impact on her life and on her family.

‘It changes you as a person,’ says Julia. ‘It changes your children’s personas and outlook and [influences] them, it has an effect on your partner … your family, as you know it, are all going through it, not just you.'

In addition to the love and support of her family, finding online support groups has helped Julia through some of her most challenging times. Members of the groups speak openly of their experiences, which helps Julia to do the same. The support groups provide another safe place in which she feels supported and can be herself.

For a long time, Julia didn’t want to discuss her endometriosis. So all-consuming is the disease for her that she doesn’t want it to consume the people around her. Julia said that she finally realised that being silent about her experience wasn’t helping her or those closest to her.

‘I’ve gotten to the point only in the last year that I’m starting to discuss it again with people. There were many years when I’d just say to people that I didn’t want to talk about it because it was boring and had no positive outcome.

‘I don’t want to be the centre of attention. Most of the time, l wanted to pretend it didn’t exist. However, in many ways, talking about it has been beneficial to help people understand what I’m going through and raising awareness for others. Having three beautiful daughters, I’d never want them to go through this battle—especially now that they’re around the age l was when l was diagnosed,’ said Julia.

Realising it’s time to do more to help herself and others with endometriosis—and with some family members showing signs of having the condition—has led Julia and her husband Michael to collaborate with Epworth to establish the Julia Argyrou Endometriosis Centre at Epworth. Together, they hope the Centre will help other sufferers be diagnosed earlier, find effective pain management and invest in groundbreaking research to end this painful battle.

We can’t cure your endo, but we can show you how to manage the condition to help improve your quality of life. Speak to our endometriosis nurse coordinator to learn more.